THE RACE TO BE MVP

Email ThisBlogThis!Share to TwitterShare to FacebookShare to Pinterest
Did you watch the start of the NBA playoffs this weekend?
With two L.A. teams in the running, here at Junk Food we can't contain our excitement...we won't have time to design new t-shirts.... joke!
The battle to crown the best in the west and the beasts of the east begins, but in the meantime the MVP will be crowned.  Last year's MVP, Derrick Rose, doesn't even feature in conversations due to his unfortunate injuries this season, but Kevin Durant, Lebron James, Kobe Bryant and Chris Paul's names are being thrown around as potentials for the 2012 season.

We asked the hardcore NBA fans at Junk Food Head Office for their opinions on these NBA Heavyweights.... 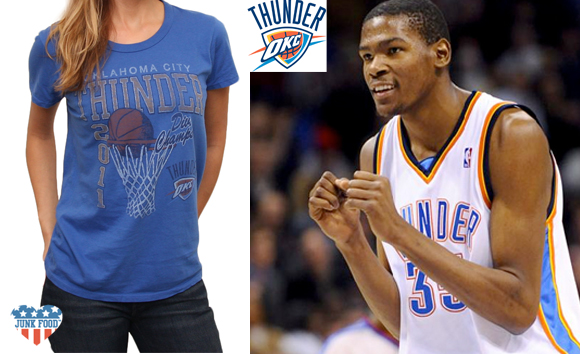 I will always and forever be a Lakers fan....But Derrick Rose is pretty incredible if he wasn’t always injured.  My 2nd pick would be Durant.
-Corine, Merchandising

METTA WORLD PEACE...not! LMAO. My Pick is Kevin Durant! (yes over my other two fave candidates Chris Paul and Kobe).  Filling up the stat sheets constantly and consistently, and doesn’t cry Like Ms Queen James and Ms Bryant.
I have the “SPURS” coming out the west BTW, with Gregg Popovich being coach of the year.
-Mario, Web

I’m going with KD.  Durant is tied with Kobe right now for the scoring title this year, This could be Durant's third STRAIGHT scoring title in 5 years.
-Nick Production 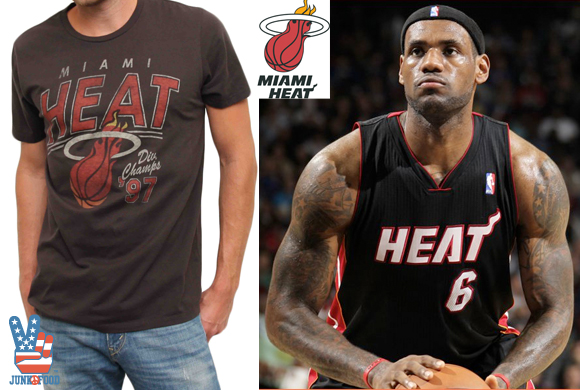 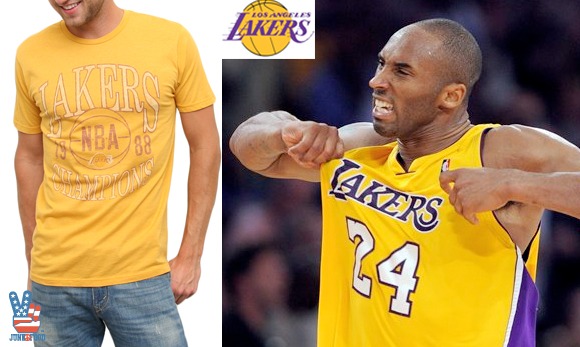 Kobe Bryant duh! He is obviously the best player in the world and plays for the only real LA team.
- Vic, Merchandising

For me its either Lebronski or Kobe...Lebron is just killing this year, better than previous years, as well as leading the Heat in Points (27.1), rebounds(7.9) and assists (6.2).  Kobe is close with Points (27.9) rebounds (5.4) and assists (4.6).  I think they might give it to Lebron based on his team, and how he has stepped up with the rest of his team fighting injuries.
I love me some Durant but it seems to me that he was really helped this year with Westbrook and Harden playing so well.
I PERSONALLY WOULD vote Kobe, because he is 33 and that’s a magic number, special....I think the same age as Jesus before he passed, and rose again to the heavens:)  AND he very much could win the scoring title this year, with only 1 other player in history winning it at age 33/34 (M Jordan).
Word
-Scott, Art

Tough call cuz KD and Lebron are so nasty, but as much as I don’t want to say it, Kobe deserves it this year. He brings the most value to his team while still being able to fill the stat sheet. Without him, the Lakers barely compete in the West. Miami minus Lebron can still compete in a watered down east and the Thunder minus KD probably would be and NBDL team. Unfortunately, the aura of Kobe Bryant far outweighs the aura of Mr. Durant. Soon enough young man, but for now, the vet still maintains the crown..... 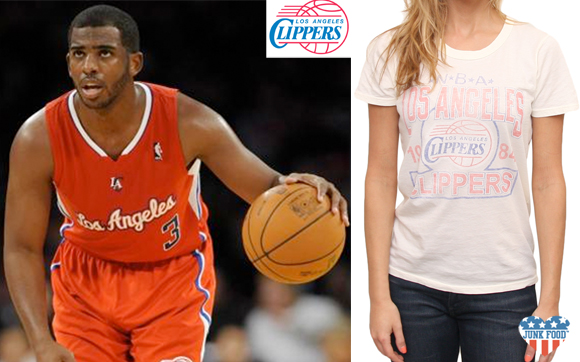 "I’m saying Chris Paul despite the fact that LeBron is the overall best PHYSICAL player.  Chris Paul is the most valuable to his team as well as being one of the actual best players in the league.  If the Clippers didn’t have Chris Paul right now they’d lose more games than the Heat would without LeBron or the Lakers without Kobe.  The Heat still would have D Wade and Bosh and the Lakers would still have Sessions, Pau Gasol and Bynum while the Clippers would really just have Griffin who can’t run a team on his own.  That’s my two cents and obviously I’m bias.  LeBron will win.  Durant will get the second most votes overall."

Check out all your favorite NBA teams vintage inspired tees for men and women at Junkfoodclothing.com!

Email ThisBlogThis!Share to TwitterShare to FacebookShare to Pinterest
Amoeba Record store is a huge independent retailer of music, with stores in San Francisco, Berkley and our very own Hollywood. Standing on the corner of Sunset Boulevard, the store is in the heart of the entertainment district and is always buzzing with energy. Here you can buy just about any CD or vinyl that your heart desires, from rock to reggae and so on...  We love that Amoeba continues to be a music powerhouse and iconic store in the face of chain music retailers and the i-tunes phenomenon.  Music fans know that at Amoeba they can not only buy the music they love but also speak to specialists working there who can advise them on new bands/releases and offer unparalleled expertise.

For this reason we were pumped to support their annual Record Store day, which encourages locals to come out and support their local record store. Guest DJ's, great deals on music and games were on offer along with Junk Food bringing their t-shirt screen printing set up along! We set up shop inside Amoeba, offering customers the chance to select a design and watch it be printed before their very eyes...!  The turn out was incredible with a huge line down the street, and a constant stream of satisfied customers! 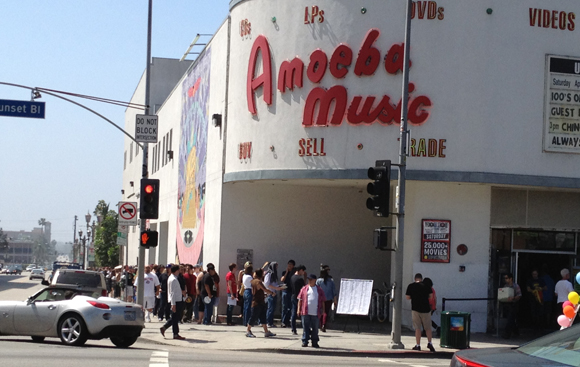 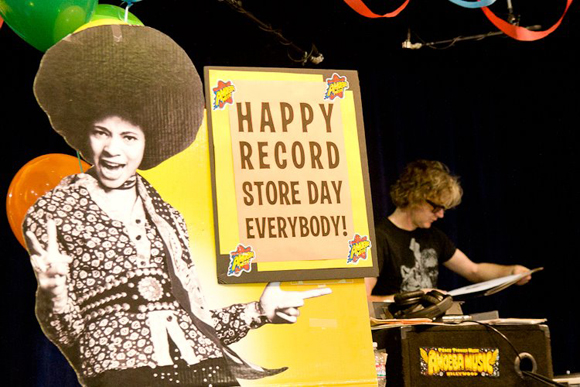 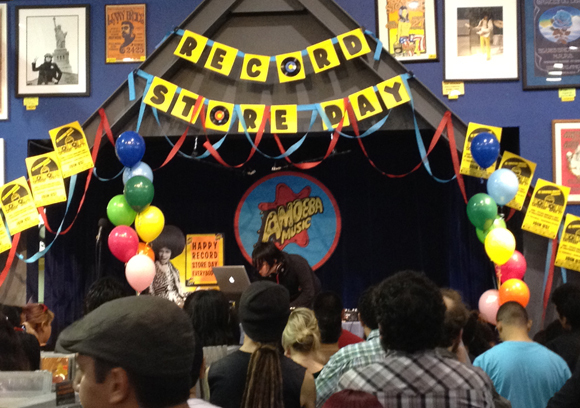 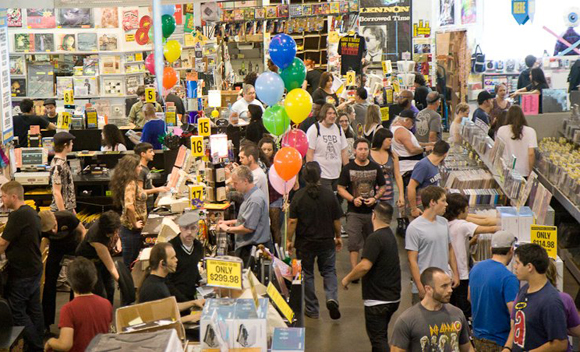 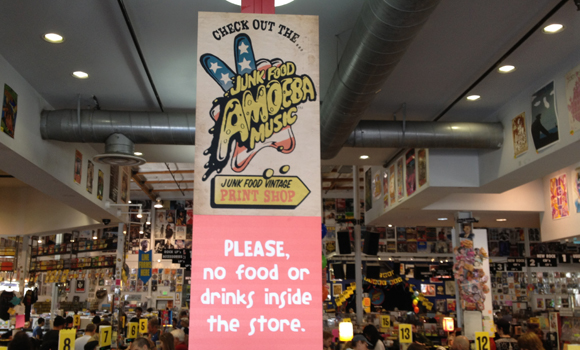 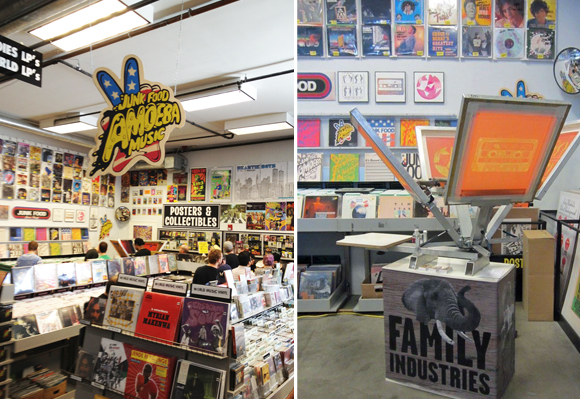 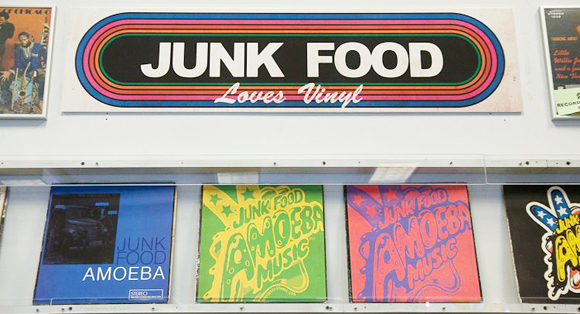 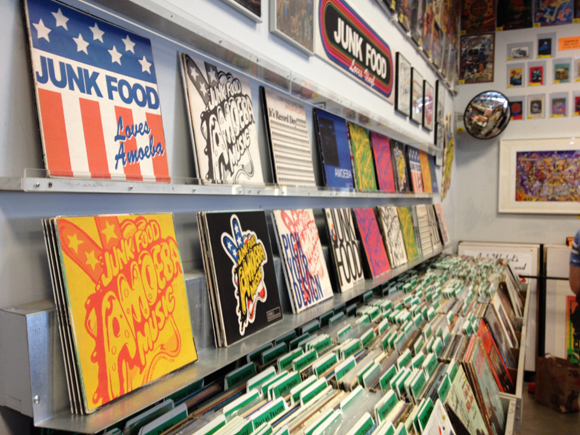 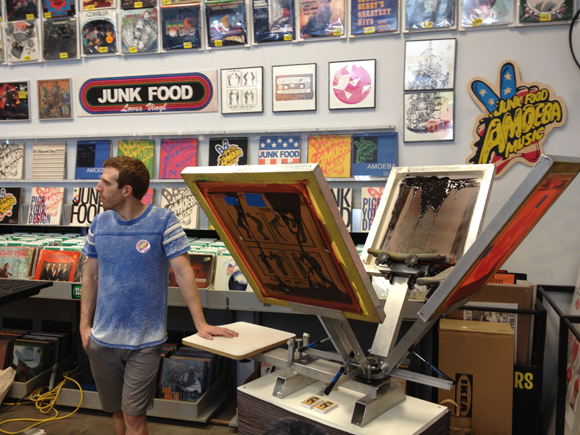 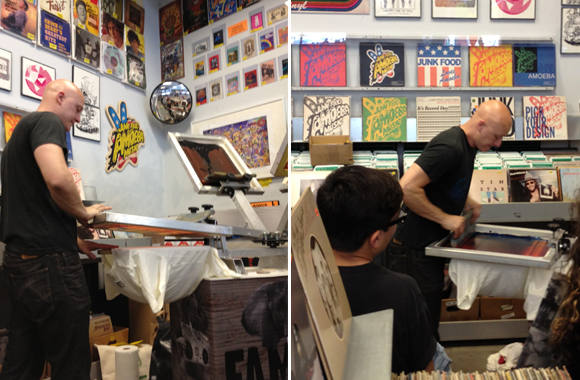 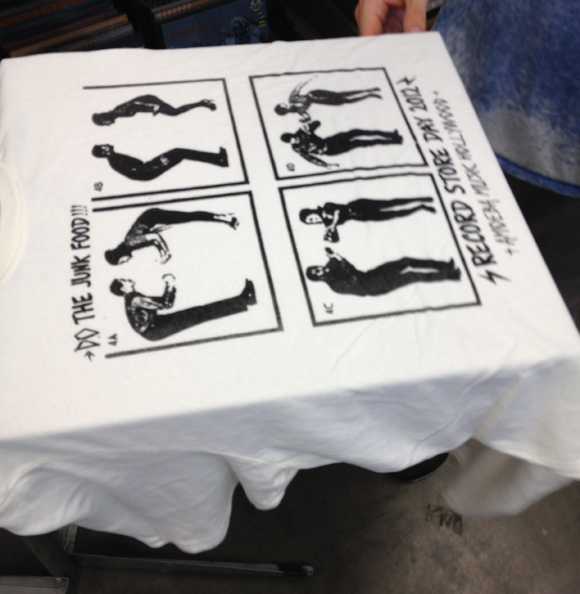 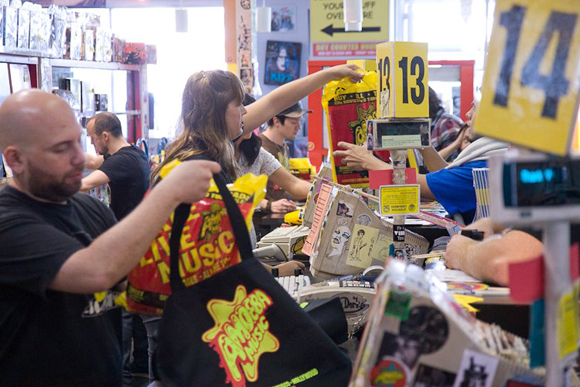 Email ThisBlogThis!Share to TwitterShare to FacebookShare to Pinterest
By now we hope you'll have checked out our awesome Venice Beach skate inspired collection, fresh for you this summer.

Check out the video of the collection!

COACHELLA IS OVER FOR ANOTHER YEAR...:(

Email ThisBlogThis!Share to TwitterShare to FacebookShare to Pinterest
Two crazy, hot weekends of live music in the desert are finished with for the year...Liz from Junk Food visited Coachella last weekend and loved it. What's not to love? - live music, hot sunny days, good times... ;) 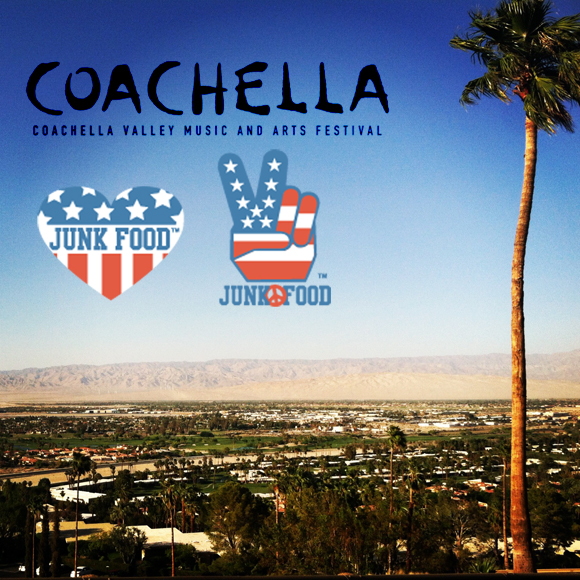 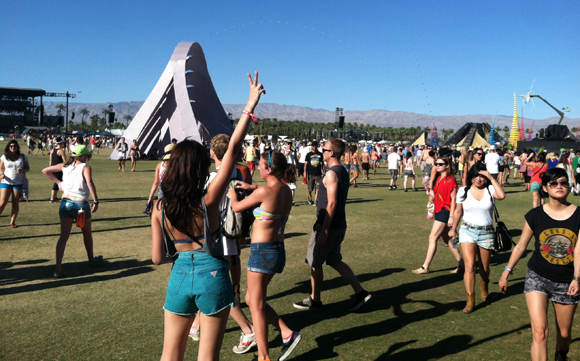 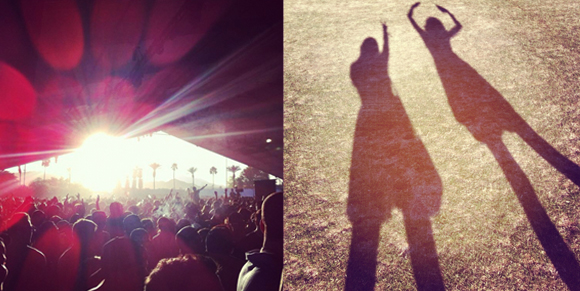 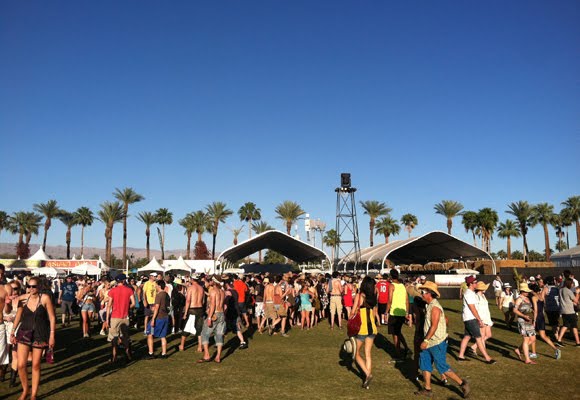 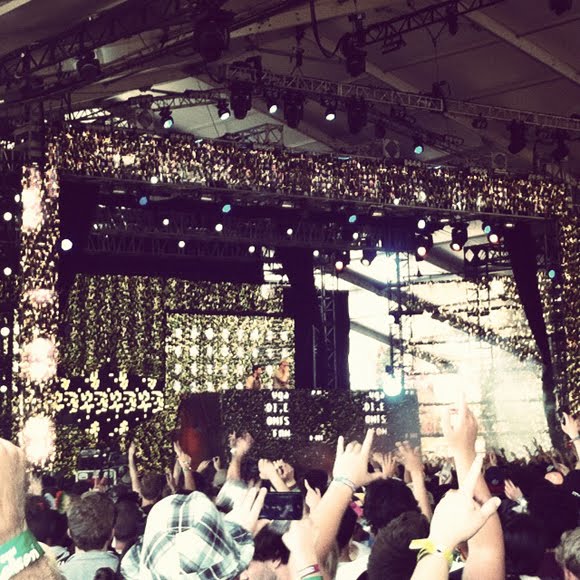 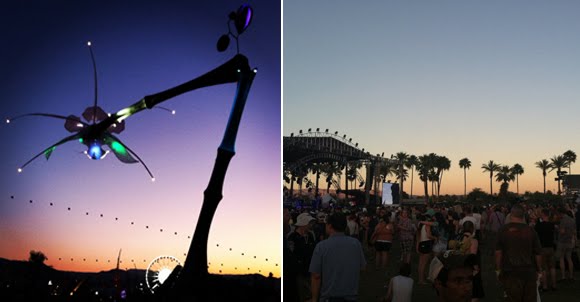 The Denim guy wasn't kidding when he said he loved Junk Food tanks... Lookin' good sporting a Squirt and a Coca Cola tank!


He also managed to spot another festival goer in our MTV spring break tank! 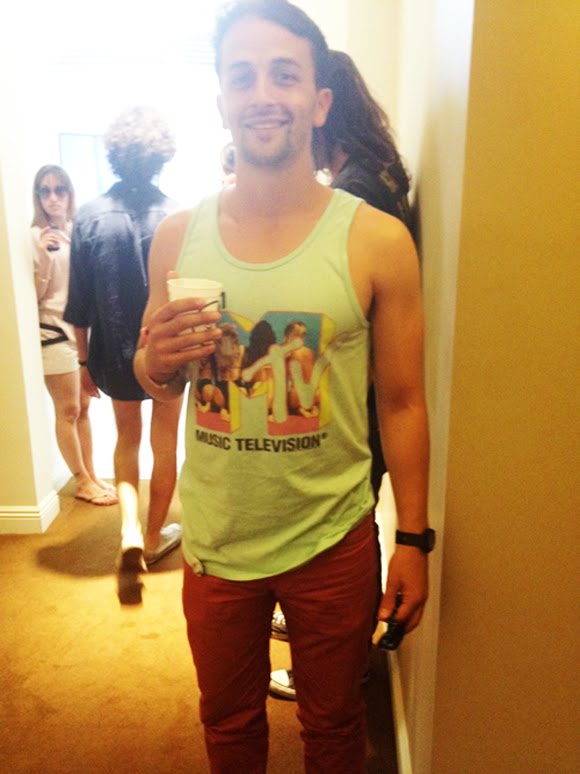 Images via The Denim Guy here and here

Email ThisBlogThis!Share to TwitterShare to FacebookShare to Pinterest
Congratulations Cindy! Our first "Pin it to Win it" winner!

We invited Junk Food fans to pin their five favorite Junk Food tees to their Pintrest page, to enter into a draw to win your five.

Cindy pinned the Originals BAD tee and Wonder woman face tee for her and selflessly pinned a Star Wars, Mustache and Voting tee for her hubby - lucky guy!

Take a look at her winning pins: 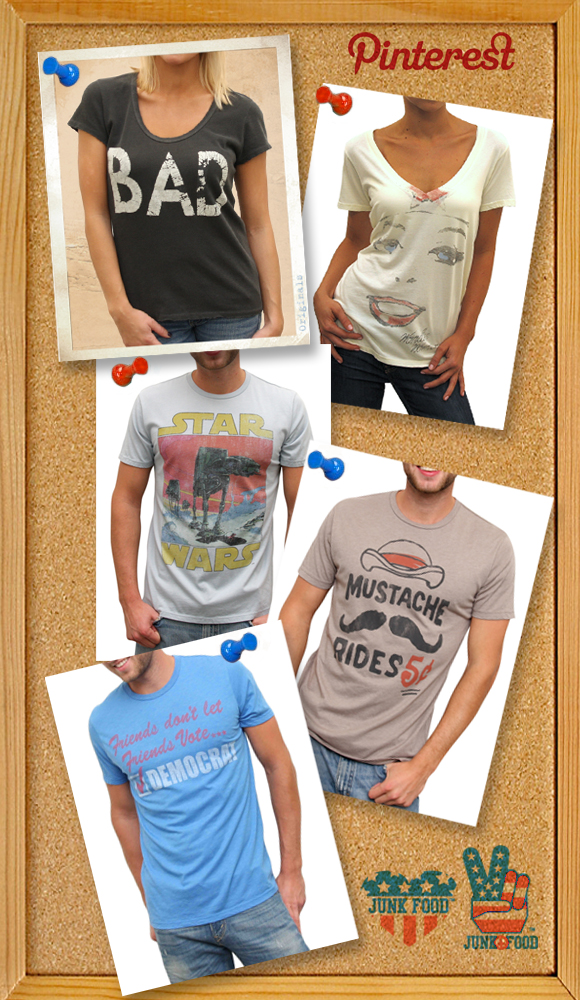 Email ThisBlogThis!Share to TwitterShare to FacebookShare to Pinterest
Have you bought a surprise tee yet from our web store?

If you LOVE Junk Food and you LOVE surprises then this could be a solid investment!  We have a huge amount of awesome designs to surprise you with! 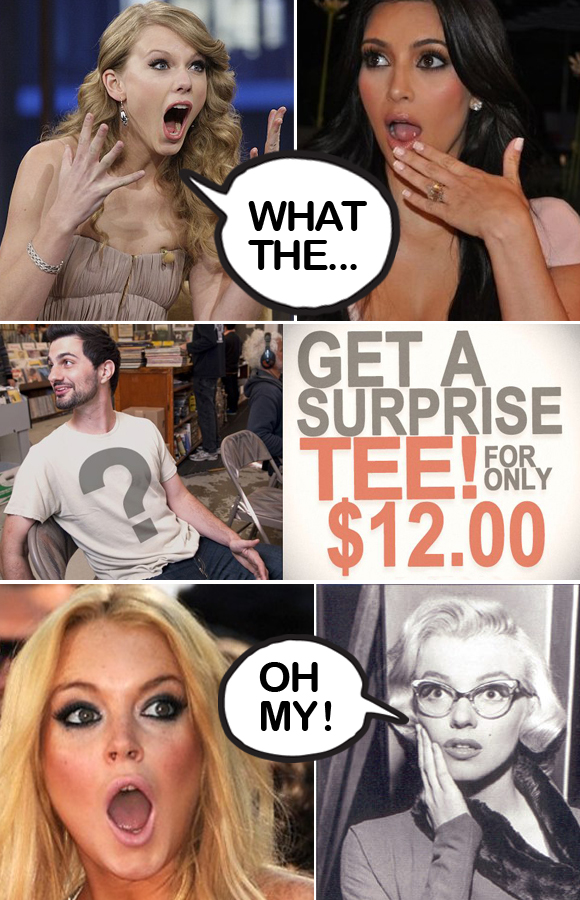 MARVEL'S THE AVENGERS | ARTWORK AND EXCITEMENT

Email ThisBlogThis!Share to TwitterShare to FacebookShare to Pinterest
With Marvel's The Avengers opening in theaters everywhere May 4, we've set hype levels at DEFCON 2 in preparation for epic badassery. A medical crew is on standby in case we can't handle the awesome.

The wait is killing us, especially after seeing the official movie trailers and surfing through our Marvel t-shirt catalogs. So now we're sifting through street art to quench our Avengers thirst before hitting critical mass. Check out this awesome graffiti artwork from some extremely talented artists. 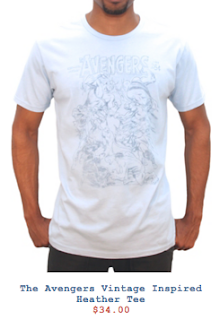 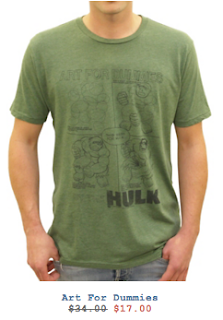 Check out a few of our vintage Marvel tees, or head to JunkFoodClothing.com and browse our Avengers t-shirts.