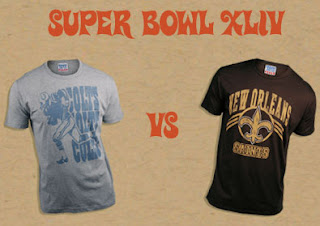 On February 7, we will see two high powered offenses square off in Super Bowl XLIV. The Indianapolis Colts come in at 16-2, while the New Orleans Saints come in at 15-3.

Throw the records out the window, as both teams were the number 1 seed in their respective conferences.

So who's going to win it all this year? Leave a comment and tell us who you pick and why!
at 6:57 AM 0 comments