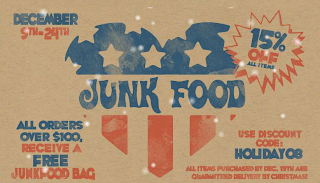 Get 15% off all Web Orders at JunkFoodClothing.com! If you spend over $100 online, you will receive a FREE JunkFood Bag!

Check out our new styles such as I Hate Christmas, Brown Sugar, Smurfette Natural, and many others.

Don't miss out on this great Holiday Sale. Use code HOLIDAY08 when checking out! Order by December 19th to ensure delivery by Christmas.
at 8:36 AM 0 comments

Check out our new styles! We've added styles like Tootsie Pop Lick Itself, Mr. Just Be Friends, Don't Open Til Xmas, More Naughty Than Nice, and many others.

So come get Junk Food Clothing for the holidays! 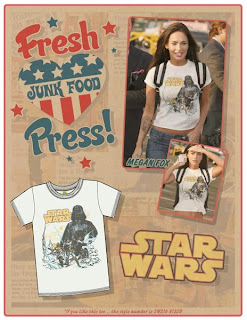 Email ThisBlogThis!Share to TwitterShare to FacebookShare to Pinterest
Earnshaw's, the leading children's apparel trade magazine, has announced the winners of the title's coveted Earnie Awards for 2008. For more than 30 years, the Earnie Award has represented design excellence in children's clothing. As the only comprehensive award program for manufacturers in this industry, the honor has grown to a coveted status, representing the industry's seal of approval.

"Earnshaw's salutes this year's winners. In this tough economic climate, to be able to earn the respect of your customers means even more," said Caletha Crawford, publisher and editor in chief. "These are the collections that drive the children's fashion industry. The 2008 Earnie winners have set a new bar for others to aspire to."

This year, the Earnie Award was presented in 22 categories, including the infant and toddler market, girls' wear, boys' wear, sleepwear, swimwear and accessories as well as a new category, Best Diaper Bag. Winners were selected by nationwide retailers from all channels. See below for the complete list of the 2008 Earnie Award winners; each will be highlighted in a special fashion shoot in the November issue of Earnshaw's.

Earnshaw's is the premier media resource serving the children's market, including apparel, juvenile products and gifts. With more than 90 years of experience, the magazine is the established voice of the industry. More than 13,000 decision makers rely on Earnshaw's print vehicle, online communications, fashion events and seminars to hone their retail strategies and merchandising techniques, stay informed on the latest trends, and keep their assortments fresh.